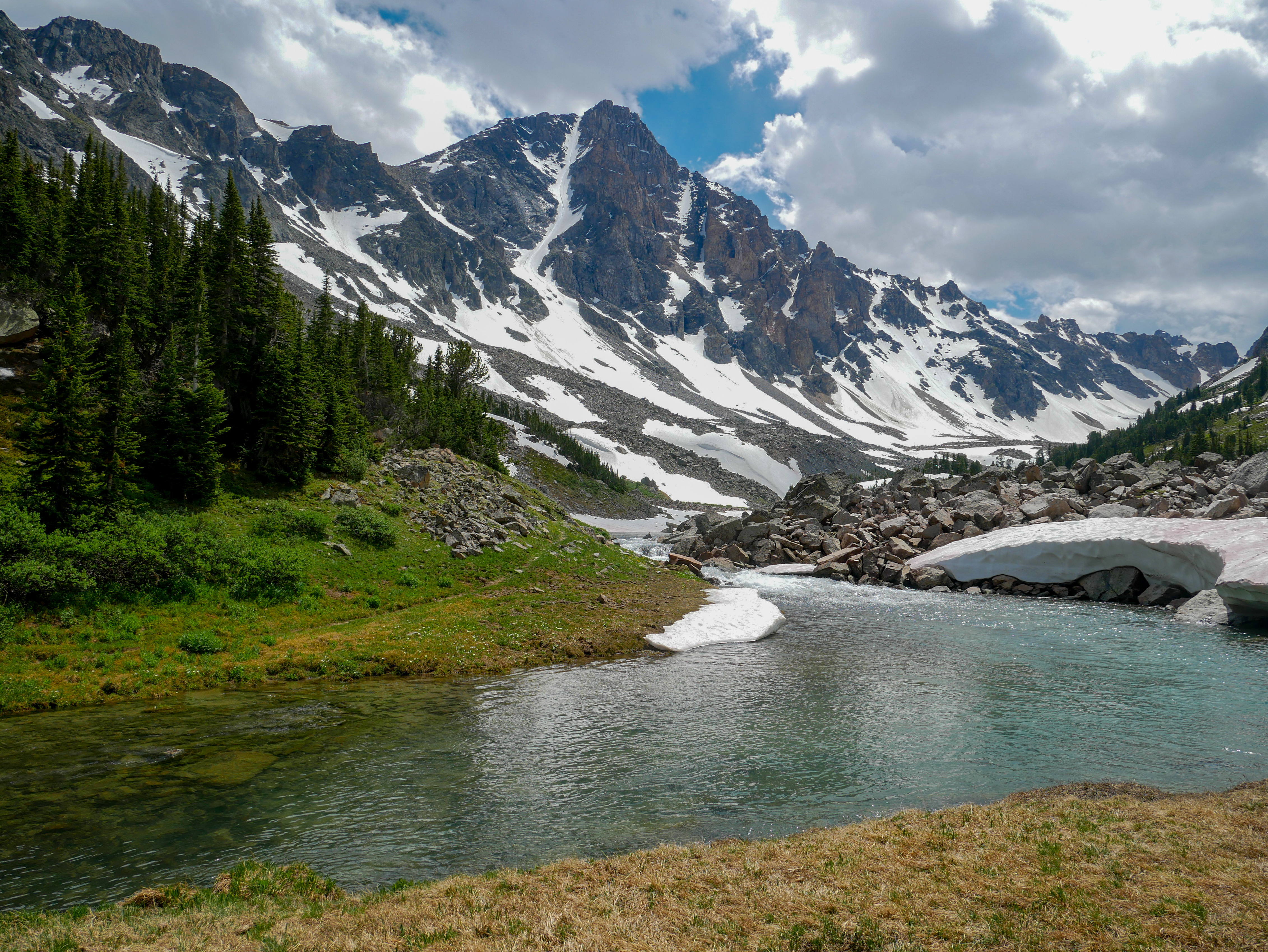 Two of the Beartooth Mountains’ most popular trails are connected by the more sparsely crossed Sundance Pass, providing sublime views of alpine lakes, early summer snow fields and granite peaks.  The Lake Fork trailhead, about 12 miles from Red Lodge, starts at 7,200 ft. and meanders gently along the Rock Creek through wide canyons towards Sundance Pass climbing only 1,200 feet over five and half miles.  Lodgepole pine forests give way to alpine meadows bursting with colorful wildflowers and the occasional moose.  Visits to Broadwater, Lost and Keyser Brown lakes provide opportunities to cool down along the way.

Around six miles in, where most day hikers turn back, the trail turns much steeper, climbing 1,400 feet over the next mile and a half where September Morn Lake awaits.  Ample sites for solitude and camping line the lake just short of the tree line at 9,800 ft.

A final push of 1,250 vertical feet over two miles takes one to the stunning vistas of Sundance Pass (11,047ft), with views of Montana’s fifth tallest mountain, Whitetail Peak (12,551 ft) to the west, the Hellroaring Plateau (10,000 ft) to the east and the alpine lakes of the Lake Fork and West Fork basins below.

After relaxing in the cool breeze at of the pass, the long descent along 54 switchbacks delivers you to the West Fork basin at 9,500 ft. and the refreshing waters of the West Fork of Rock Creek.  Of course, deep snow well into mid-July often covers much of the trail, requiring a glissade down the north side of the pass, bypassing many of the switchbacks.

From the basin it’s all downhill, through more lodgepole pine forest and the stunning Quinnebaugh Meadows.  Plenty of campsites await on flat (and relatively rock free) meadows under the shadow the Silver Run Plateau and fading views of Whitetail Peak towards the pass.  The West Fork of the Rock Creek winds through bogs and quiet meadows where moose are often found, before cascading down the valley towards the quick descents of Sentinel and Calamity Falls.  The last mile and half open up to burndown resulting from the Cascade Fire of 2008, before reaching the West Fork trailhead at 7,600 ft.

For the ambitous, this 19.7 mile route can be completed in either direction in a single day, assuming an early start.  Those wanting a more relaxing pace will find plenty of spots for camping along the way, as well as, spur trails to Lake Mary (at Quinnebaugh Meadows on the West Fork trail) and Black Canyon Lake on the Lake Fork side (which is a rustic / non-maintained trail), as well as other options to explore.